The Island of Roatan: Mahogany Bay

This was the destination we were initially looking forward to. Carnival has their own port on this small island and because of this, they can change the rules a little.

First, Nudity is OK while on the ship when docked.

Second: The beach is nude.

You do need clothes to get between the ship and beach, but barring bad weather, you’ll get some sun if you want it.

We had bought a GoPro camera and a couple of full-faced snorkels and wanted to try them. We had also purchased the excursion that included Sky Ride access to the beach, clamshell covered chairs, and a float.

The weather wasn’t great, light rain and overcast. It wasn’t terrible though. The clamshell chairs were actually pretty nice. The water was cold but still batheable. And there was nothing to see in the water. It was just sand. There was a sand bar that you could stand on.

They had a nice bar that served food and since we were the only ones in the pool and Bar area, Clothing was optional there as well.

We had some good Jerk Chicken and 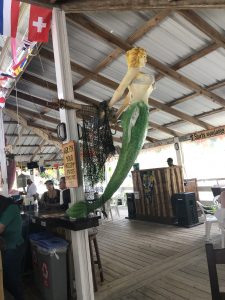 Quesadillas.  The rain got us back in our room a bit early.