The nudist event of the year is clearly the Big Nude Boat. About 2600 people sign up to travel together with very little on but a smile. Now how naked can you be on such a trip? Good question!

On the day we left port in Miami, it looked like an ordinary Carnival Cruise. The ship is The Victory. We boarded the ship and found our way to the Lido deck. This is where you can get food 24*7 and where the pools, water slide, and hot tubs are. We found a couple of chaise lounges and got some lunch and drinks until our room was ready. 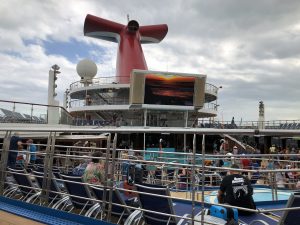 At the sail-away, everyone was clothed. Some minimally, but clothed. After we were three miles out, an announcement was made that nudity was allowed.

Some people were fully nude, some were topless, others fully dressed. Whatever makes you comfortable. And to say there are all shapes and sizes is an understatement. The average age was probably 60 though. It is generally an older crowd but there were a few 20-ish couples onboard.

The first port we pulled into on day two was Half Moon Cay, a private Bahamas island owned by the cruise line. Because we were the only ship there, the whole beach was nude. Actually, everything except the food and shopping area was nude. You had to be dressed to take the shuttle boats to the island but after that, whatever you wanted. The water was calm and clear and there were chaise lounges everywhere. We rode horses into the water. It was a magical day! 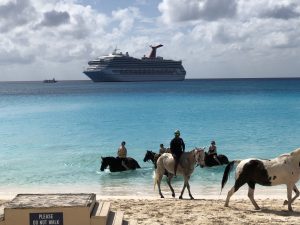 Back on the ship, we met up with friends for dinner and afterwards noticed that the ship was rocking pretty good. We planned to see the musical review but it was cancelled because of rough seas.